A yurt is a Mongolian dwelling dating back to the times of Marco Polo.

It is round with a lattice-work wall, tension cable, compression ring, and conical roof.

This simple yet effective design is renowned for its warmth and stability. 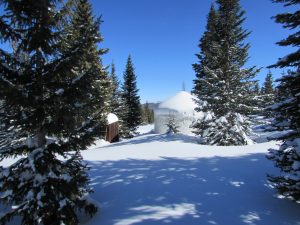 All 5 of our yurts are hand-made. They have been specifically built to handle the challenges of winter in the mountains.

The Southwest Nordic Center has been offering Yurt adventures since November 1987.

We started with one yurt, Neff Mountain, which is still the most popular of the Cumbres Pass Yurts.

In 1990 we added the FlatMountain Yurt. In 1994 Trujillo Meadows was included. In 1996 Grouse Creek Yurt joined the team.

Through all these starts and changes Doug MacLennan has been the head cook and bottle washer. He was a lot younger when Neff Mountain Yurt was started, but still manages to break trail and ski with his headlamp as needed.

Below are dates that were taken and now are available:

These can be reserved on-line.

Under Snow Conditions at the top of the page you can find links to current snow levels, weather reports, road conditions and video cams for near the Yurts.

All of the Yurts are now open!

We are currently taking reservations for all the Yurts for this coming Winter.
They may be made on-line.

There is a two night minimum.

We begin taking summer reservations on March 1st at 8 AM on-line.